Points after Round 11, The Fairfield Merlin Stages 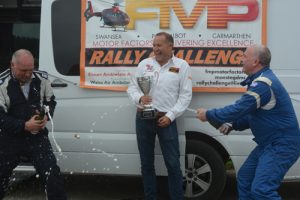 Will Mains and Richard Merriman celebrate their Championship success  x 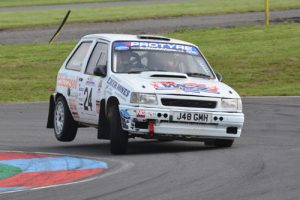 Will Mains and Aled Edwards 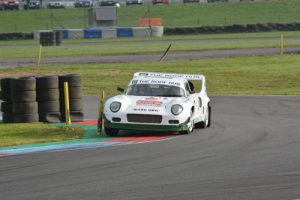 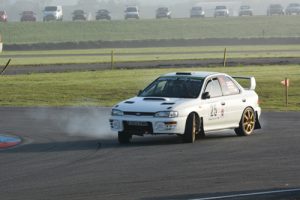 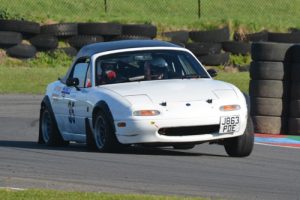 A dry warm day greeted competitors to the final round of this years Rally Challenge at the Welsh Motorsport Centre, Pembrey. Carmarthen Motor Club welcomed new sponsors Fairfield Motorsport and Merlin Wonders Tours, and attracted a full entry for the event.

Being four points behind the leader and with a possible 5 points for a non-finish, all Will Mains and Aled Edwards had to do was cross the start line for Will to retain his FMP title. Despite that he pressed on, taking the Vauxhall Nova 1.4 into the top 10 during the day amongst far more powerful opposition.

Richard Merriman and Kath Curzon didn’t have an easy ride on their way to seizing a Class victory. With the FMP Tarmac Title already in the bag, Richard had to finish the rally to be crowned Welsh Tarmac Champion. After being held up by two competitors the front one pulled over only to cut back in front of them causing a heart stopping moment. Despite being slowed further and getting a crack windscreen from a stone thrown up they still took the Roof Hub Darrian T90 to fifth overall and a podium Challenge finish.

Brothers Oliver and Phillip Hopkins took the best overall result of the day amongst contenders finishing 2nd in the Spencer Sport run Mitsibushi Mirage. Oliver reported that although not as powerful as his Evo 9, the braking power was phenomenal as the Mirage is 250kg lighter.

The rally was also a round of the Formula 1000 Junior Championship where youngsters as young as 14 can compete with experienced competitors alongside. Sara Williams, who has competed on rounds of the Renault Clio Trophy in France this year gave the benefit of her knowledge to fellow Brecon Motor Club member Joseph Palmer in a Peugeot 107.

Regular FMP Contenders Barry and Seyyan John hit problems on the last stage, taking a maximum time and robbing them of a Top 20 finish in the rally but they still secured a Top 20 in the Championship.

Sean Jones and Sophie King from Burry Port used a Mazda MX5 in standard trim for the event and got a third in Class. The result wins Sean win the FMP Two Seats Trophy for the highest combined points for competing as both Driver and Co-driver throughout the year.

Co-driver Paul Wakely’s commanding early season lead gave him a big enough cushion to claim a commanding victory  over Caernarfon’s Llion Edwards. Lion competed throughout the year with Dylan Davies who has won the FMP Gravel Trophy for a fourth time.

All of the above information is pending the provisional results being made final.

Including overseas points scored on;

No minimum amount of rounds to enter.