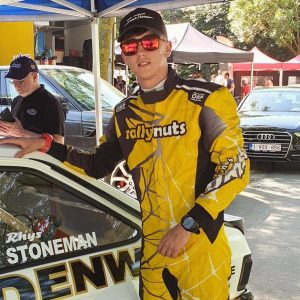 The year was to see Rally Challenge Double Champion Rhys Stoneman’s Co-driving career take a step up with a full British Rally Championship season after competing in 27 rallies in 2019. It was at Loughborough University on the Motorsport UK AASE Academy programme that he met driver Finlay Retson and plans were made for the crew to use a Fiesta R2 T19.

The season had a promising start on Round 1, The Cambrian Rally with a Top 10 BRC placing and second Junior home. The 19 year old also committed to compete on as many IPS Paint Rally Challenge Rounds as possible. This years BRC was to include the Ypres Rally in Belgium in June but with the demise of the Championship the crew still planned to make the rescheduled date in October. However, with the deadline for paying the full entry fee imminent and following the Welsh Government decision to impose a 14 day quarantine on visitors returning from Belgium, it was decided to pull the entry. *

*At time of writing, Belgium was named as one of the worst affected countries currently with the cancellation of the rally highly likely.

The crews rallying is set to resume with the M-Sport Return to Rally Stages held entirely within the Greystoke Forestry Complex at Ambleside, Cumbria on August 22nd. The event is open to M-Sport manufactured Ford Focus and Fiesta models.

Motorsport UK have released a video with safety information to assist in the running of the event.  Further details of the rally can be found at: 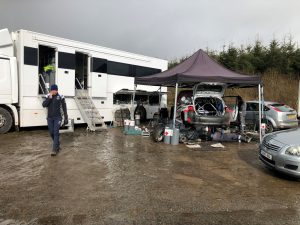 Before lockdown, Rhys accompanied the M-Sport Team on a three day trip to Southern Ireland to assist in refining the Fiesta R5 Mk.2 tarmac set up in the countries bumpy West Cork lanes. Pre event preparation is a huge part of the sport and he explained what a great opportunity it was to be involved with the Team in a ‘behind the scenes’ non-rally scenario.

Having been selected for the Motorsport UK’s Co-driver Academy this year he has benefitted from staying in contact with renowned Co-driver Paul Spooner who has given him valuable advice.

Rhys has had tremendous support from his family, and is currently working in the building industry to secure funds to fulfil his ambition of becoming a professional co-driver.

Wexford is a Non-Starter 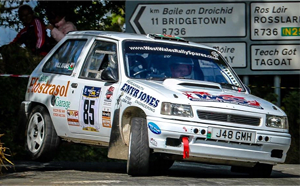 Pictured is Will on his first Wexford Rally.

With his cars re-fettled, Llandysul MC’s Will Mains hopes to resume rallying with a return trip to Wexford are not to be. On his first attempt at the Rally in 2018 he narrowly missed out on Class victory to a local Driver. Initially, the organisers decided not to allow overseas competitors but now they have taken the step of cancelling the event. Will’s Triple Championship Rally Challenge success is even more remarkable when it was discovered during a rolling road test that the car was down on power and the differential was not operating correctly during the 2019 season. Will, who has two Nova’s prepared and ready to go has secured new sponsorship from Jonathan Jones Tiles and Tiling.